Lately I’ve been trying to review some Software Engineering concepts that are widely talked about on a day to day basis, that I may have learned about at university, but that I ended up forgetting.

I’m going to use a very simple example to demonstrate how this type of optimization can be achieved. In this example I’m going to use the factorial function since we can easily write it in a recursive fashion:

As one can see, the above fuction (Factorial.compute/1) is recursive, one can see the call to compute(number - 1), however the last function call is actually the multiplication (thanks herulume).

Since this is a recursive function, whenever we call it with a value greater than 0 the system that’s running it will have to keep multiple function call stacks.

Let’s illustrate what happens when we call Factorial.compute(5) in order to better understand what I mean:

With the function presented above we can now start using Tail Call Optimization to reduce the number of stack frames that need to be kept for this factorial function.

Here’s how the tail optimized version of the function looks like:

Let’s do the same exercise we did with the non optimized version above and let’s illustrate, once again, what calling Factorial.compute(5) would look like with this version:

It might be a personal opinion, but I do think that it’s way easier to reason about this version than the one we explored before.

At the beggining of this blog post I’ve explained that this kind of optimization reduces the number of stack frames the applications needs to maintain. This should also mean that the memory footprint of the application is, then, reduced as a direct result of this optimization.

To test this assumption I’ve decided to put both versions head to head and check two metrics:

In order to measure execution time I simply used the following Elixir function (taken from stackoverflow) which returns the duration of the provided anonymous function call in seconds .

For the memory usage values I took a screenshot of the memory usage reported by Erlang’s observer, which you can enable by running :observer.start() on an IEx shell, this should give us a rough idea if memory consumption grows or declines.

Finally, in order to test the calls I ran each one 5 times in a row, back to back, using the following code:

I used the average execution time of these function calls so as to avoid any deviations that might be cause by caching (which didn’t happen, but better safe than sorry) and what not.

Now it’s time for the results!

In regards to execution time, as expected, both versions reported similar results, with the following times being gathered on an average of 5 runs:

As for the memory load, that’s where we actually see the difference of the optimized version! 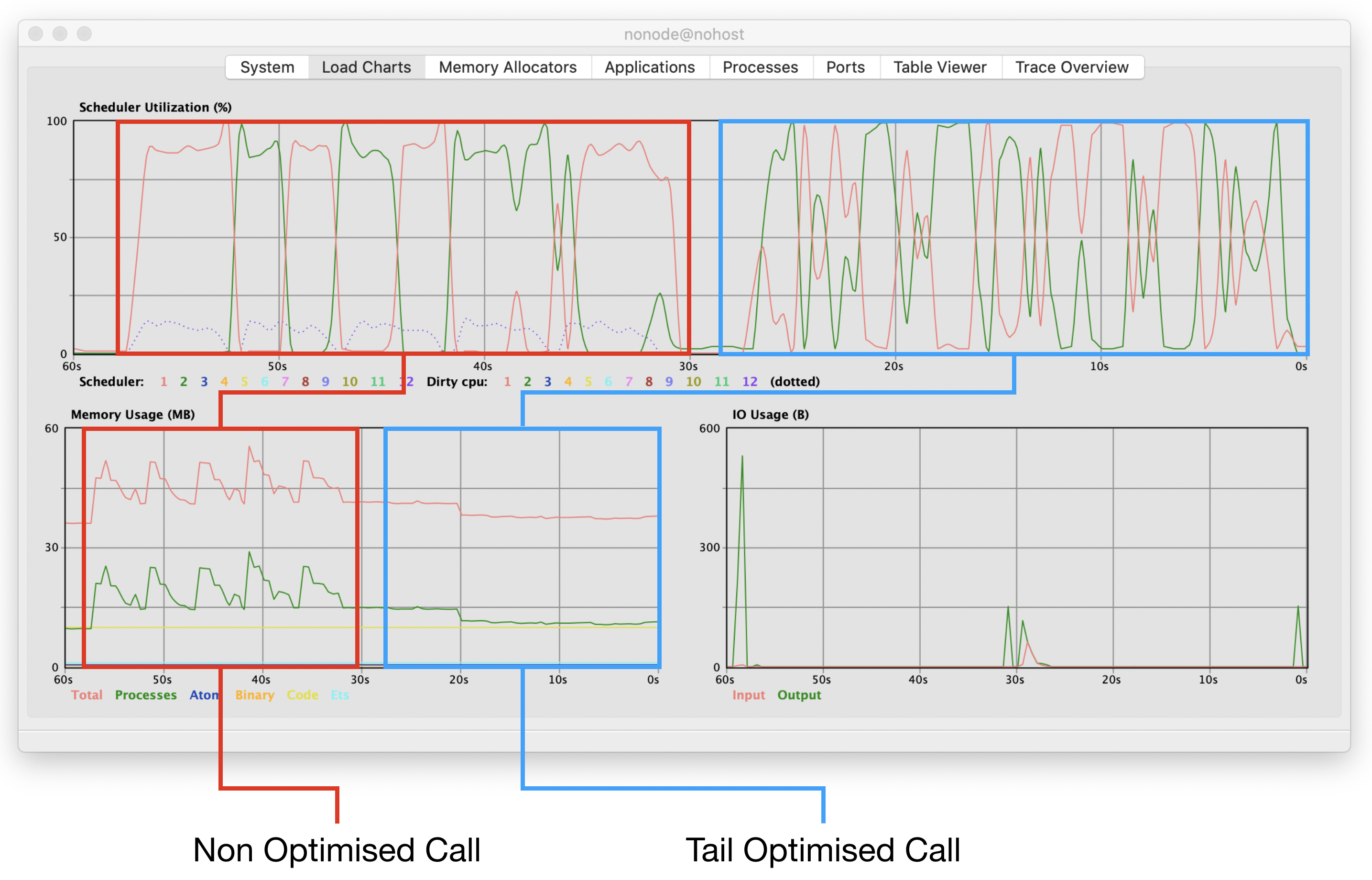 I’d say these are great results!

It’s fun to review these type of concepts and try to apply them in a more pratical scenario in order to fully understand how they work and what are its impacts.

I’m planning on releasing more of these blog posts where I dive into some software development concept and try to explain it using Elixir so stick around and don’t forget to keep checking this blog from time to time.

Lastly, thank you, the reader, for taking the time to read this post. If you got any feedback at all I’d encourage you to express it by following one of the links below!